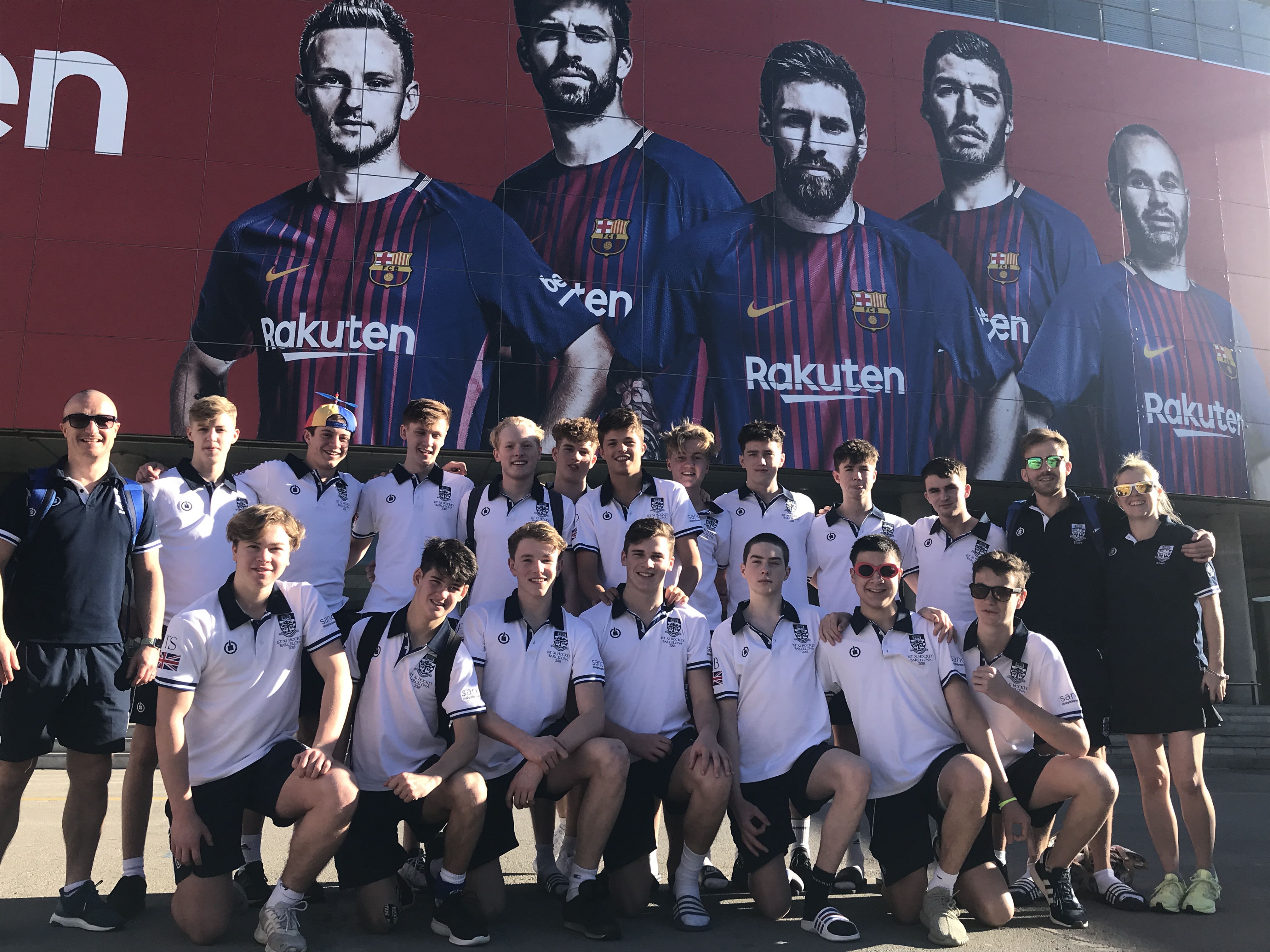 From January 3-7 the Canford 1st XI Boys’ Hockey Squad of 17 travelled to Barcelona for a much anticipated pre-season tour. We left the UK in the early hours in monsoonal conditions and arrived in Spain to 20 degree temperatures and bright sunshine! The five days that followed were excellent, both on and off the pitch. Two intensive training sessions to acclimatise and work on set plays and a tour of FC Barcelona’s Nou Camp stadium preceded the prestigious Hockey Reyes Tournament at the Real Club de Polo de Barcelona, this year celebrating its 70th Anniversary. An invitation event, boasting excellent facilities and three water-based pitches, we were keen to make a good impression so future year groups and Canford teams could gain the same experience. A Gala dinner launched the occasion on the evening of January 4th, with eight U18 boys’ teams, five U18 girls’ teams and men’s and women’s senior club sides from England, Spain and Holland being represented.

Our first match was versus the hosts, RC Polo, on the main Eduardo Dualde pitch in front of a partisan crowd. We played a very controlled game and a high quality affair saw opportunities for both sides. Featuring seven debutants, we eventually lost 1-3, with Harry Pickard on the scoresheet and Lachlan Fulton man-of-the-match. We played again later that day, versus Willem College from Holland. A highly technical and tactical contest followed, resulting in a narrow 0-1 defeat despite chances to equalise. George Baugniet was man-of-the-match for an imperious midfield display. Our final group game the following morning was against Calday Grange from Liverpool. We started strongly and went 2-0 ahead through Harry Pickard and James Elwood. Calday pulled one back before a superb counter attack initiated by Matt Daubeney who stole possession and fed Harry Pickard. In turn, he found George Baugniet with a long pass and Baugniet deflected the ball past the onrushing keeper. A 3-2 win meant we finished third in the group and played Pedralbes HC from Spain in the 5th place playoff on Sunday morning. With some typically English weather the heavens opened in a rare break from the sunny blue Spanish skies. Richie Steavenson took the game by the scruff of the neck and produced a virtuoso individual display to back up his man-of-the-match performance against Calday, with a hat-trick in this game. We won 3-0 and Richie was awarded the players’ player of the tour. Captain Jack Taylor was the coaches’ player of the tour and GK George Robson was voted ‘top tourist’. The talented RC Polo team won the tournament, beating Repton 3-1 in the final, illustrating the standard of our performance in our opening game.

Recovery sessions post training and match days in the unheated (very cold) hotel swimming pool were a regular feature! The benefits to the squad as a whole in terms of camaraderie, team spirit, playing different systems and styles and experiencing different cultures for our domestic season this term cannot be underestimated. It was a fantastic touring opportunity, and to date the 1st XI have won their first three matches of the term. Many thanks to our sponsors, Carolina Bamballi from FTI Sports Tours and the parents for their support.