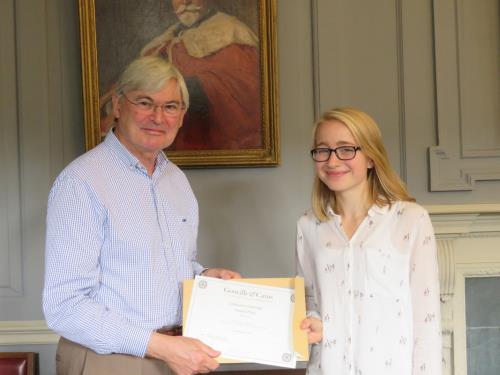 Many congratulations to Upper Sixth Former Natasha Treagust, who has been awarded joint second prize in a recent linguistics essay competition run by Gonville and Caius College, Cambridge.

The Linguistics Challenge received entries from pupils across the country, with only six pupils actually winning a prize.  Natasha’s essay, "What are the important properties of the language used to communicate with people with learning disabilities in a medical setting?" was praised by the judges, with a representative commenting:

“This was a very organised account which highlighted how conscious thought needs to be taken when interacting with an interlocutor who has learning disabilities.”

All six prize-winning pupils travelled up to the College for the prize giving ceremony where they had the valuable opportunity to mingle with Gonville and Caius alumni and meet a number of important people, including the Master of Caius, Professor Sir Alan Fersht, who presented them with their awards.  Natasha was awarded a prize of £200 to share with the school.

This result follows on from success in an essay competition, the Kelvin Science Essay Prize, run by Peterhouse, Cambridge where Natasha, alongside fellow Canfordian Alby Stevens, were among the 22 entries commended out of the 250 received.

“I am delighted that Natasha’s talent has been so well recognised by two colleges at Cambridge University.  She is an extremely bright and hard working pupil whose future looks very exciting.  I am looking forward to seeing how her interest in language develops as she considers her further education and career options. Currently she is firmly focused on Medicine but understanding linguistics and communication skills are clearly of universal importance. ”

Natasha was very pleased with her award:

I was amazed to come joint runner up in the linguistics challenge. The process of writing the essay was a really useful way for me to reflect on the work experience and volunteering I have completed over the past couple of years, in preparation for my application to medical school. I only joined Canford a year ago but the quality of teaching and support has increased my confidence and meant I felt able to seek other academic opportunities. To finish the year with my work recognised in this way feels very special."