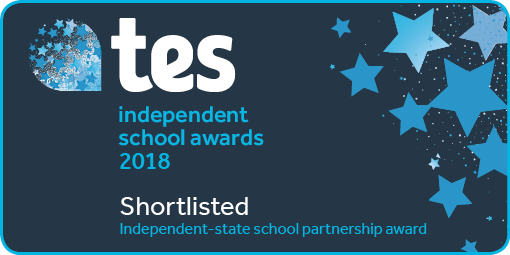 Canford is thrilled to announce that it has been shortlisted for the Times Educational Supplement (TES) Independent Schools Awards 2018 in the Independent-State partnership category.

The school is very proud of its sponsorship and close association with The Bourne Academy in Bournemouth.   While there are a good number of independent schools who are associated with academies, Canford is one of only a handful who are a full sponsor.  Since opening in 2010, exam results have improved dramatically ranking highly among non-selective Bournemouth schools.   A £10 million investment programme has included building work for a new Maths and English block and Music and Drama studios.  Originally offering education from 11-16, a new Sixth Form has been added giving the opportunity of a quality education for boys and girls aged 11-18 years.

Canford and The Bourne Academy pupils and staff link through many initiatives during the school year, and a joint staff conference 'Improving Outcomes' was held as part of an inset in 2016.

Many congratulations to all those who work so hard to develop our partnership, without whom we would not have been recognised through this award.

For more information about the Canford/Bourne Academy links, please visit www.canford.com/The-Bourne-Academy and the Academy website www.thebourneacademy.com