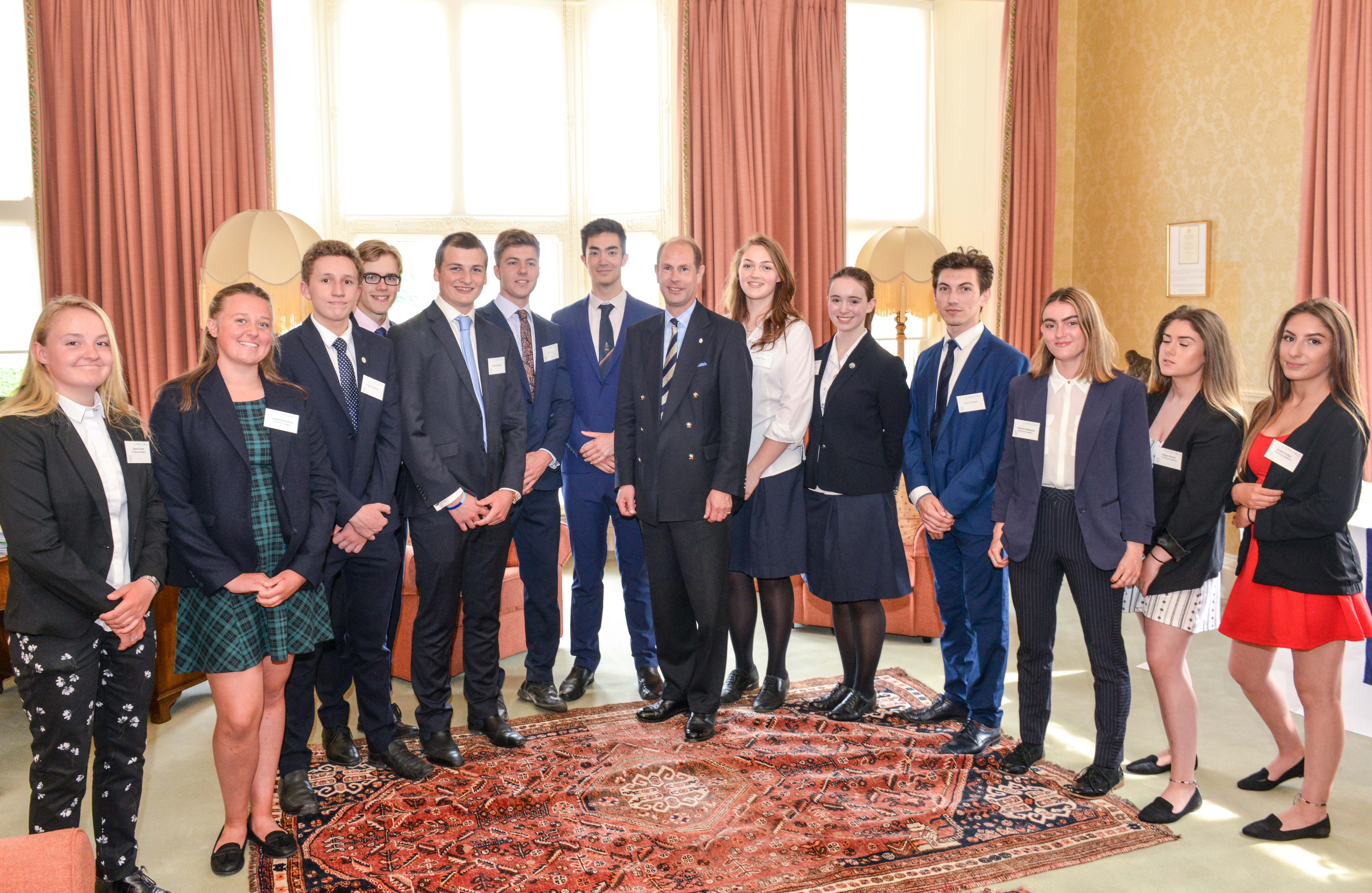 As part of a campaign to generate support for The Duke of Edinburgh’s Award (DofE) charity, His Royal Highness, The Earl of Wessex visited Canford on 13th and 14th June 2018. Through a combination of DofE engagements, Real Tennis events and fundraising activities, His Royal Highness hopes to enable a new generation of young people to start their DofE journey in the UK and abroad.

The visit to Canford began with tea with pupils from Canford and from The Bourne Academy, an Academy school in Bournemouth which Canford fully sponsors.   Both schools play an active part in the DofE, and Canford is an official DofE Licensed Organisation.  The Earl chatted to the pupils about their experiences of DofE and what they had gained from taking part in their programme.  Currently 67 pupils are taking part in the DofE from The Bourne Academy, including five who have just completed their Gold Award, 56 Silver and 20 Bronze while at Canford 74 Sixth Formers are currently undertaking their Gold and 14 their Bronze, with a further 57 starting their Gold this September. In May, former Bourne Academy student, Sophie Eaton, attended a presentation at Buckingham Palace where, in the presence of HRH The Countess of Wessex, she received her Gold Award.

A dinner was held in the Long Gallery in the evening for over forty guests who heard more about His Royal Highnesses vision for the future of the DofE.  Two Canford pupils currently working towards their Gold Award – Natasha Treagust and Alby Stevens – spoke of how much they had enjoyed and benefited from doing their Award.    Thanks also go to the Canford musicians who entertained the guests with a barber shop quartet and piano performances during pre-dinner drinks.

Canford’s Real tennis court was built in 1879 and is used regularly by both Canford pupils and external club members.  On Thursday morning HRH The Earl of Wessex took to the court for a series of matches, beginning with a masterclass with junior pupils from local School Castle Court and followed by doubles against current Canford pupils and club members.   His Royal Highness had the opportunity to meet local dignitaries and long-standing members of the Canford Real tennis club, run by professional player Steve Ronaldson, whose family are synonymous with the sport.

“We were delighted to host His Royal Highness as part of his work promoting The Duke of Edinburgh’s Award charity.   It was a great honour for pupils from both Canford and The Bourne Academy and I am sure the experience will have inspired them as they work towards the completion of their Award.  I hope The Earl enjoyed the variety of age ranges and talents of his opponents during the course of the morning.

We hope that HRH's visit to Canford will have raised awareness and a good amount of funds in support of the inspirational development opportunities the DofE programmes offer young people.”

“As a DofE Charity Trustee and Gold Award holder, HRH The Earl of Wessex is passionate about supporting young people to reach their potential, whatever their background or circumstance.  We are grateful for his dedication to the Charity. HRH’s support, and the generosity of so many local partners, will help us extend our reach and work towards our ambition of all young people having the opportunity to do their DofE. The Earl’s enthusiasm for Real Tennis which shows that the impact of a DofE Award really does last a lifetime.”

The Duke of Edinburgh’s Award (DofE) is the world’s leading youth achievement award that is currently helping over 430,000 young people to develop for life and work in the UK. In 2017/2018, over 275,000 young people started a DofE programme, including over 60,000 from disadvantaged backgrounds.  Founded by HRH The Duke of Edinburgh in 1956, the DofE is currently being delivered in 10,014 DofE centres such as schools, youth clubs and prisons, supported by over 3,000 partner organisations and approximately 40,000 adult volunteers from all walks of life.

In total, over six million people have participated in DofE programmes in the UK and achieved over 2.8 million Awards since 1956. In 2016/2017, 142,961 achieved a Bronze, Silver or Gold Duke of Edinburgh’s Award.

The DofE is supported by UK employers including Amey, St. James’s Place, Tarmac, British Gas, DFS, Heathrow and RSM who endorse the skills and attributes developed whilst doing a DofE programme such as resilience, commitment, self-motivation and team working.

The Duke of Edinburgh’s International Award Foundation is a Registered Charity in England and Wales, No 1072453. There are more than one million young people currently participating globally in 141 countries and territories. 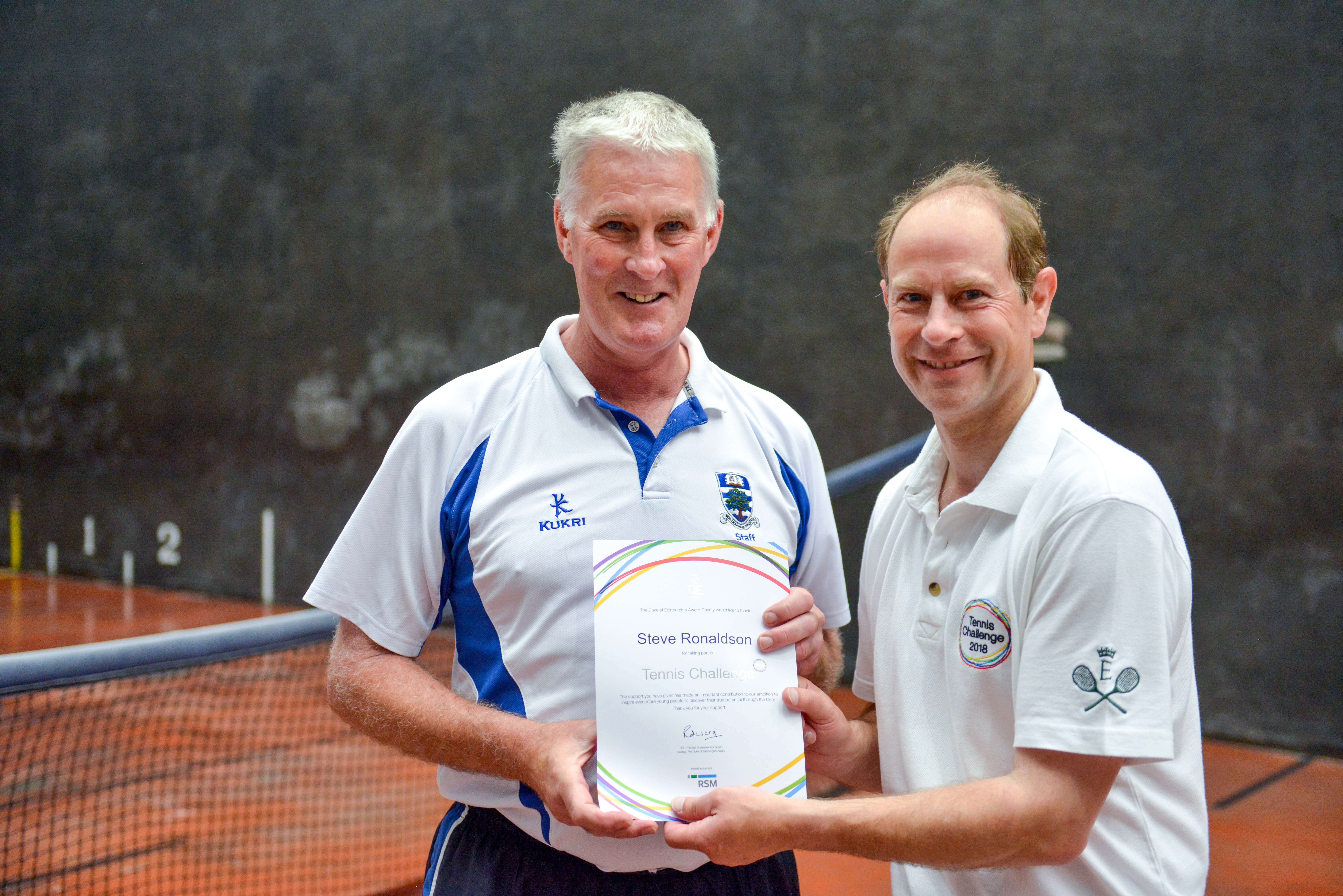