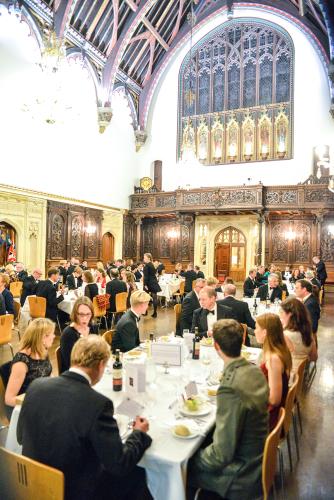 On Tuesday, 17th October, the Officers and NCOs of the Canford CCF’s Royal Naval Section hosted their annual celebration of the Navy’s greatest ever military victory; the decisive victory at Trafalgar in 1805.  This event is an opportunity for the Officers, and particularly Colonel Culley, to say thank you to all those Sixth Formers (the NCOs) who, Monday after Monday, turn out to help run the school’s Combined Cadet Force.  Furthermore, all the parents and close family of these NCOs are also invited to enjoy a convivial evening when it is de rigueur for all to put on their very gladdest of glad rags; the girls wear their best cocktail dresses and the boys don black tie to look as grown up as possible … and that is just the adults.  Following some pre-prandial drinks, ‘battle is joined’ at tables representing ships of the line from the battle itself, with Officers and NCOs hosting our other guests in a meal that can only be described as sumptuous. Canford Head Chef Glen Elie and his staff provided a repast of the very highest quality; smoked trout starter followed by a Beef Wellington (to keep the Pongos – naval slang for the Army – happy … or at least one particular pongo; Major Risbey), and finally an apple tarte tatin for those with a sweet tooth.  Without doubt, a meal that would have graced the high table at the Admiralty.

Our intellects were sated by a well-crafted and eloquently delivered presentation by the Mess President, CPO Della Kearns,  on the life and achievements of Admiral Nelson; and then Sub Lt Toy was allowed to let off some steam with a brief clip of a naval engagement from Master and Commander, to remind the assembled throng that every great admiral’s or general’s victories are achieved through the blood, sweat and sacrifices of innumerable soldiers of the line or the below-decks  Jolly Jack Tars.  Finally, the formal proceedings were brought to a close after Colonel Culley had announced the promotions of a number of senior NCOs, in recognition of their contribution to the CCF.

Many thanks to all those who contributed to making this such a memorable evening for our cadets.