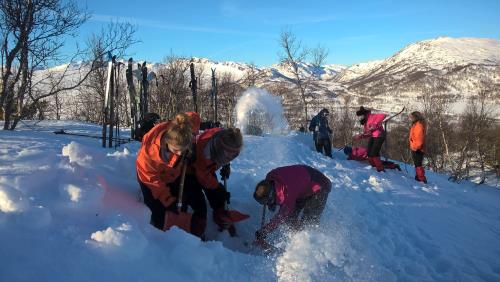 This February half term, 31 Fourth Form Cadets from the school CCF braved extreme conditions for an eight day Arctic expedition in Norway, three of which were spent away from civilisation covering nearly 35km, all whilst carrying the clothing and equipment needed to survive the overnight temperatures that dropped as low as -25C!

Initial training involved teaching the cadets to cross-country ski; all were complete novices but picked it up fantastically. They also learnt emergency procedures in avalanche awareness, meteorology, as well as the importance of basic survival skills in order to look after themselves and each other in the rough Arctic conditions.

A highlight of the trip was each cadet constructing and sleeping overnight in their very own snowhole, where they were entirely self-sufficient for the duration.  Overall the challenge was significant but achieved by all bar one of the cadets.

When speaking of the experience, one pupil said that "the sense of achievement and satisfaction in tackling something that was so new was incredible, even if I was very nervous to begin with", and another claimed "that was the hardest night of my whole life!".

View more images from the trip