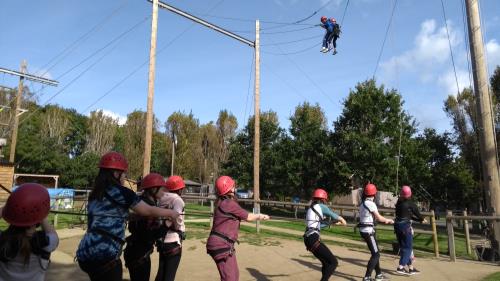 Last weekend, Canford pupils travelled to the Isle of Wight to spend three days with a group of children from the inner city community of Northam in Southampton who are supported by the City Reach charity.

"We left the school on Friday and travelled to PGL, an all in one adventure camp on the Isle of Wight.  That evening we played some football with the kids and got to know them all. The next morning the real activities started. We started with the Giant swing, which was what it says on the tin. You get hauled up on a swing via a pulley system and then you get let go and swing freely.  After that we moved onto the Matrix, which was a teamwork based puzzle solving activity. One of the tasks what to get to the other side of the room without setting off alarms that are attached to bits of strings, much like the laser system scenes that you see in bank heist movies.

In the afternoon, we did Dragon boating which is like kayaking but with 20 people in one boat. At first it seemed like a recipe for disaster and I readied myself to go in the sea, but surprisingly we managed to stay afloat and whilst we didn’t win any of the races, we came pretty close. Later that evening we did a whole campus wide hide and seek which was amazing as it was pitch black. As the usual seeking techniques didn’t go very well for us, I resorted to using Snapchat map to finding the others which was surprisingly effective.

The next day was shorter but still jam packed full of activities. We started with some climbing and although not all the kids were particularly keen on heights to begin with, all of them gave it a go and not a single one of them didn’t make it to the top and come down without feeling proud of their achievement. After that we played some Aeroball, which is like netball but on a trampoline. We were split into teams and it got very competitive, but luckily my team managed to come out on top. After that the weekend was complete and it was a thoroughly enjoyable experience for everyone. The kids were already talking about how they couldn’t wait for next year and the Christmas party later in December."