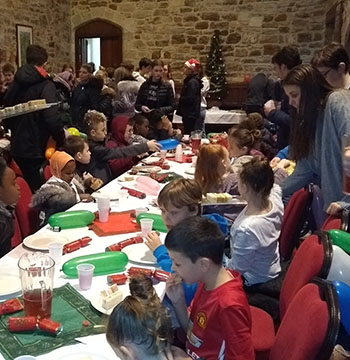 On Sunday 10th December, Canford School hosted the City Reach group for an activity filled afternoon.  A record number of Canford pupils joined in to help and the event turned out to be a huge success. This year marked the 17th year in which Canford School has been working with the inner city Southampton community of Northam, currently led by Mr Allen.

The day started at midday where we met the children at the tower and took them through lunch, which happened to be Christmas lunch!  After lunch we went to the sports hall where we played a mixture of sport, ranging from football to various forms of catch to everything between.  After that, we went into the swimming pool giving the children impromptu swimming lessons mixed with various forms of water polo. From there we went on to the Christmas party held in John o’Gaunt’s, playing various games including the obvious favourite ‘Pass the Parcel’ accompanied by Christmas songs playing in the background. The whole event was a real pleasure, not just for the children but also for us who helped. Being able to get involved in events such as these helps you really see where you can not only make a difference, but bring a smile to the faces of the City Reach children.

There are more events later in the year such as a sponsored walk next term to raise money for the charity.  Thanks to everyone involved for helping to make it such a great afternoon.

Click here for more information about the  City Reach Project