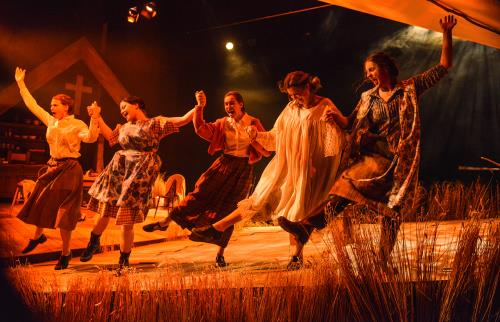 Five spinster sisters in rural 1936 Donegal, the seven year old son of the youngest, his father, a Welsh gramophone salesman, their brother, a missionary priest gone native in Uganda and returning home emotionally shot, and all of this observed through the eyes of the son twenty-five years on.  The script Brian Friel weaves around these  vivid, funny, tragic characters is wonderful, witty and poignant and was embraced with deep respect, love and intelligence by the nine Canfordians  who spent a fair bit of their term becoming these characters, accents and all, in a remarkably convincing way.  Seven year old Michael, an intelligent, knowing child, loved and teased by his aunts, watches as they dream, argue, scrape a meagre living and dance to music beamed all the way from Dublin on their Marconi radio.  And all this happens over one magical summer during the pagan feast of the harvest, Lughnasa.  Uncle Jack returns to the family fold hardly able to reconstruct his old world, confusing the tribal rituals of Africa with his former Catholic beliefs, imagining that he is still looked after by his house boy. Okawa, in the remote leper colonies, where he joins tribal dances and sacrifices to the pagan gods, much to the horror of his upright sister Kate, the local school teacher. And occasionally young Michael sees his feckless father, Gerry Evans, returning on brief visits to his mother, before disappearing to another life and family in Wales.

Kevin Wilkinson created one of the most beautiful and original settings to have graced the Canford stage and the actors took possession of their home in Donegal.  The sisters were portrayed with moving sensitivity by Grace Gammell, Ruby Featherstone, Tasia Soskin. Gemma Daubeney and Daisy Morse;  Ned Vessey was the narrator, Michael, lyrically unravelling his past for the audience;  Ollie Dunger was the raffish Gerry Evans, charming and directionless;  Brennan Dyball was the shambling, shuffling,  whimsical Uncle Jack; Connor Williams was the watchful,  kite-building son.  And then there was the dancing to wild Irish music and the sweet strains of 1930’s dance bands so beautifully choreographed by Claire Camble-Hutchings.  The cast and director were enchanted most of the term and maybe some of that was passed on to the audiences over three nights in March.

Photos from the performance can be viewed here.