Excellent Performance in the Pringle Trophy 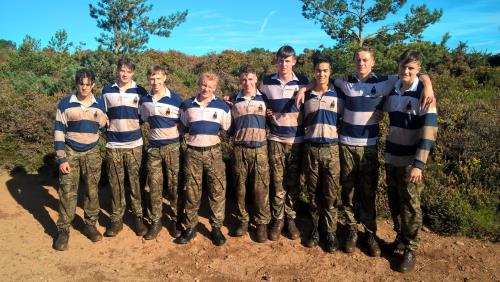 Nine members of the Canford CCF Marines travelled to the Commando Training Centre at Lympstone over the weekend of 6th – 8th October for this year’s Pringle Trophy competition, widely regarded as the most prestigious event in the Royal Marine CCF calendar.  The 48 hour event involves days starting well before dawn and ending late into the night.  The gruelling challenge comprises 12 different tasks including section attack drills, contact drills, navigation, endurance, drill together with some new challenges such as tracking having spent the night out on the training area.

The Canford team was up against 13 HMC schools from across the country and the competition was as fierce as ever.  The boys were a little disappointed with their final position of joint 10th with Wellington College, but it was an excellent opportunity to test their skills against other school Royal Marine sections and they all learned a great deal from the experience.   They should be particularly proud of their 4th places in both the Section Attack and Drill where their turnout was commented on by the drill instructor as “Excellent. I will be surprised if anybody comes anywhere near you today”.

“Another superb effort from our marines in this extremely tough weekend challenge.   They should all be very proud of their achievements against some really strong competition, and I was very impressed with their tenacity, team work and will to succeed even when exhaustion started to set in.  They all learned a great deal which we can build on over the course of the next 12 months.  Thank you to everyone involved, particularly the Royal Marine instructors who certainly put our young cadets through their paces!”