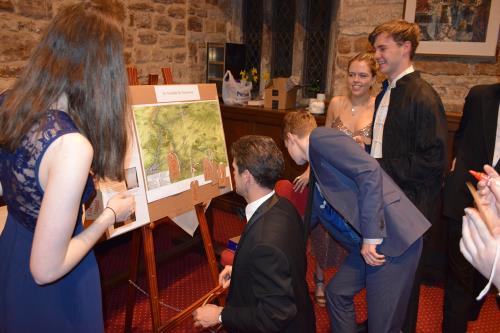 Monday 20th March saw the History Society Dinner take place; a celebration of all things historical for those pupils studying History in the Sixth Form.  This year, before the dinner, we were treated to the inaugural Canford School Great Historical Debate.  Members of the Lower Sixth were invited to prepare a paper on the question of whether revolutions owe more to the masses than they do the individual.  We listened to three exceptional speeches from Ned Vessey, Javier Monroy-Jepez and Will Butt.  All three young men spoke with intelligence and offered three original and differing perspectives on the question.  They fielded the audience’s questions well and a lively floor debate ensued.  After much deliberation the Upper Sixth judging panel of Louis James, Naomi Green and Gemma Daubeney agreed that Will Butt was a very well deserved winner.

After the debate we moved into John of Gaunt’s for an excellent three course meal and further entertainment in the form of a challenging History quiz created by Charlie Hathorn and Will Garthwaite, as well as an excellent historical version of “pin the tail on the donkey” devised by Mr Fearnley.  At the close of the evening it was announced that to mark his retirement after well over forty years of service to the History Department at Canford, this meal would henceforth be known as the Keith Hay Dinner – we sincerely hope to welcome Mr Hay back to a dinner with his name on it for the foreseeable future!

The Upper Sixth organising committee of Will Garthwaite, Charlie Hathorn, Louis James, Bee Alcaraz, Gemma Daubeney and Naomi Green deserve enormous thanks for the effort they put into making the evening such a resounding success.