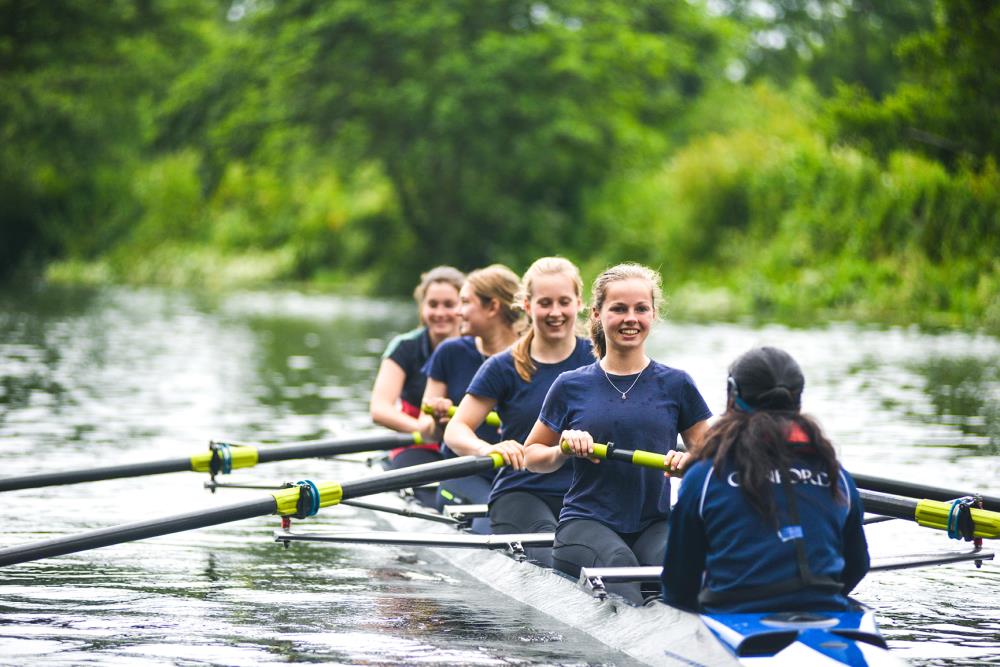 Pupils, staff, families and the wider community came together on the riverbank on Saturday 10th June for the annual House Regatta.   Action on the Stour was followed closely by supporters on the tow path, who also enjoyed Pimms and cream teas to rousing summer jazz from the Poole Borough Band.

As ever out on the water the competition was fierce.   Full results are available on the Week 7 Sports Report  but highlights included:

A range of experience and ability was on show in the Senior Girls’ singles, with a show down between Tasia Soskin and Lizzie Lander ultimately battling it out for the title and Lizzie taking the win for Wimborne by a length and a half.  In the Senior Coxed Fours title, the Salisbury House crew of Josh Bale, Rob Way, Rupert Talfourd-Cooke, Tom Dodd and George Farthing walked away with the overall win after beating School House in the final and Lancaster/Wimborne in the semis.  Some great racing in the Girls’ equivalent ended with a Beaufort Vs Beaufort clash for the overall win while the senior crew triumphed over their junior counterparts by ¾ of a length. A win for Honor Bailey, Sarah Ellis, Rosie Monk and Kitty Arnold with a second win of the day for Lizzie Lander who jumped into the Beaufort crew as substitute for the absent Issy Cox.

Some more exciting racing in the Junior Girls’ doubles saw Fourth Formers Rachel Ko and Imogen Gallego beat Fifth Formers Martha Baldwin and Kiki Sullivan by just half a length.   This was a really exciting race which will hopefully be the platform for some greater things next year with these current Fourth and Fifth Form girls racing together as a school crew.   Meanwhile in the Shell races, Charlie Bird dominated the field and left with a win over Rory Thomas in the final of the Boys’ Singles, and there was a win for Tati Reed against Stella Jarvis in the equivalent girls race.  In the Shell Girls’ Coxed Quads,  de Lacy girls Stella Jarvis, Tati Reed, Eve Hewett, Faith White and Phoebe Kibble took the win from Wimborne after beating Beaufort in their semis.  The Shell boys produced the most exciting racing of the day in their Coxed Quad, with the Monteacute crew of Nat Cranton, Max Hansen, James Ward, Rory Thomas and Ned Potts coming through with a win against Lancaster by 2 lengths

The big finale of the day came, when the staff took on both the boys and girls in their respective Eights.  Canfordian Robert Way was persuaded to jump into the bow of the staff 8+, teaming up with Miss Birch, Mr Culley, Miss Laity, Mr Tyndall, Miss Doherty, Mr Dryden, Mr Moreland and Mr Moon.  A solid crew not to be underestimated – that was until the Senior boys 8+ trounced over the finish line with clear water between them and the staff to take the win!   Redemption was had by the staff, but didn’t come easily in a hard fought battle against the girls.  This was the first time the girls have raced as an 8+ against staff in the House Regatta, and they did not disappoint.  Pushing the staff to practice everything they preach to take the win from the girls by just a quarter of a length.

Salisbury House took the overall House Regatta title for securing the most cumulative points across the various races.

A fantastic day was had by all, with a real sense of community and camaraderie amidst the boat club and all its members, from staff and pupils to all of the friends and family with their ongoing support.

For images from the event please visit https://media.canford.com