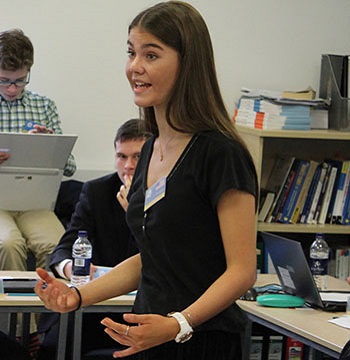 Canfordians have taken part in two Model United Nations events so far this year. At Clayesmore School on 2nd December, the seventeen pupils maintained Canford's strong track record with over half of those taking part receiving awards for their debating and negotiating skills and Highly Commended Delegate awards for Barnaby Scudds and Connie Doxat. Representing the USA, Italy and Myanmar, pupils debated issues including the Rohingya Refugee Crisis, the rights of journalists and oil extraction in the Arctic Ocean.

Meanwhile at Queen's Taunton on 17th March representing India, Iran and Argentina, pupils debated the rise of political extremism, the rights of Palestinians and the dumping of plastic waste into the oceans. At the end of the day, there was another impressive haul of awards: Michael Bryan won a Highly Commended Delegate award, while Max Glowacki, Lili Mikova, Yernur Niyetkaliyev, Barnaby Scudds and Felix Spowers were judged Commended Delegates. Most pleasing of all, however, was that our team representing India won a Commended Delegation award for their excellent performance across all six committees.

MUN co-ordinator Mark Rathbone commented: "It was impressive to see our pupils participating with such enthusiasm and commitment in this exciting inter-schools competition. I am delighted that so many of them received awards for their efforts. Many thanks to Clayesmore and Queen's Taunton for the superb organisation."