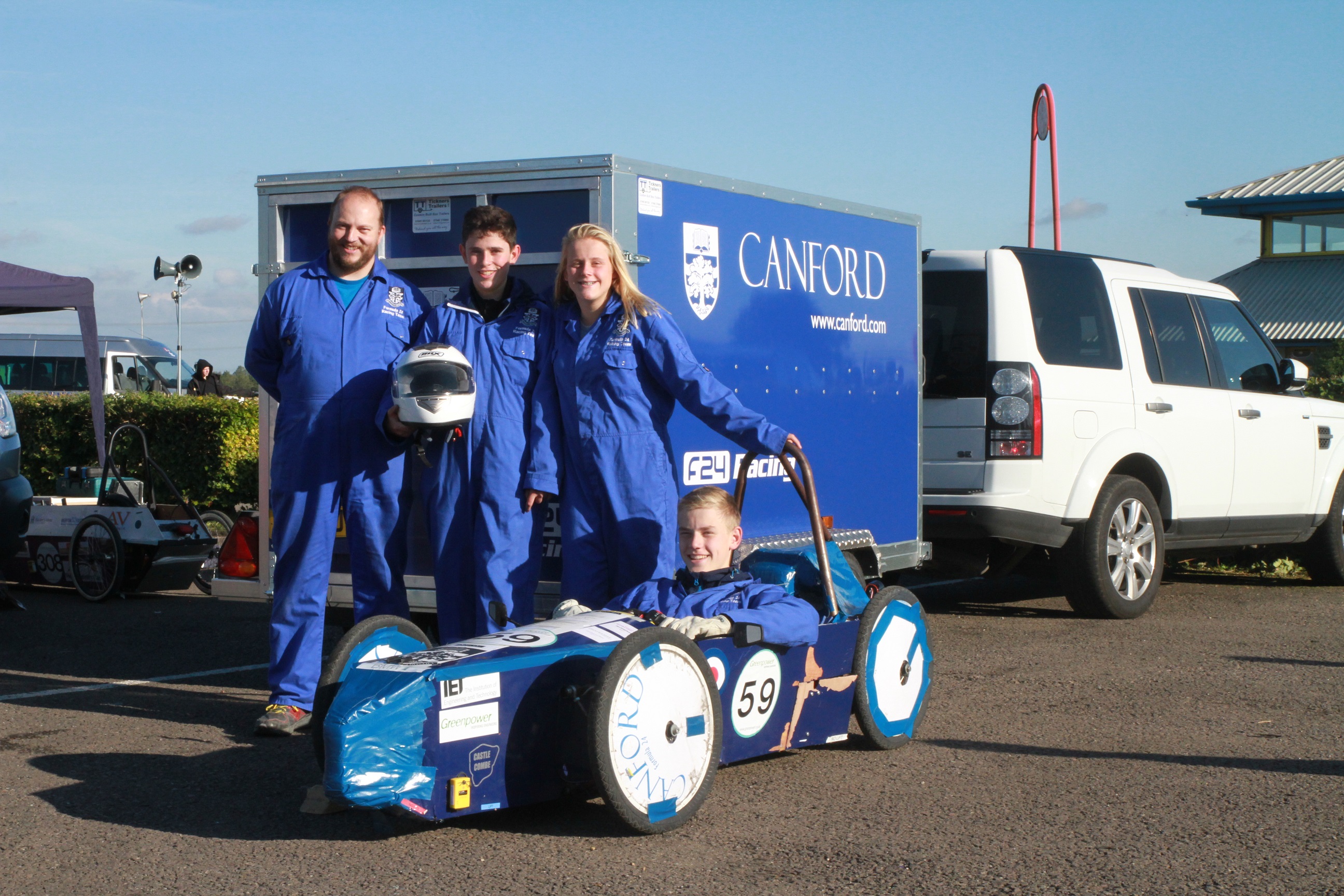 The Formula 24 team took a small crew to race at Castle Coombe circuit on Sunday 17th September for the latest heat in the international electric car racing series.

The weather was against us, with cold temperatures hampering battery performance, and even the best teams were 10% down on last year’s times.

New Shell Jessie Shuttleworth took to the driver’s seat first as she put in a few practice laps around the 2.98 mile circuit to get used to the car as this was to be her first time in the driver’s seat. Then captain, brother Matt Shuttleworth, jumped in after a practice pit-stop for his own tour of the circuit since he’d been unable to drive last year due to a broken leg. He’d spent the whole 2016 race managing his team from the pit wall and was itching for a chance this year to take a spin around the track and learn the curves. Matt organised his team excellently this weekend too; developing a 40/30/20 strategy with experienced driver Sam Smith, aiming to pit at the most opportune moments to avoid traffic.

The grid formed for the first race, and Canford started on row 4 of the 52 cars who made it to the start line in time. The batteries didn’t quite make the full distance in this race and after a slightly longer than planned stint, Jessie returned on the back of a trailer with a flat battery 15 minutes before the flag dropped. Some thinking was needed! After some lunch Matt suggested the use of a lower gear may be the way to go, remembering we’d changed it to a higher gear during our last outing at Goodwood. An excellent plan… but the ideal gear, the 15 tooth drive sprocket was nowhere to be found.  We had left it at Canford! A brave decision therefore had to be made, do we drop right down to our 12 tooth practice gear, or risk another flat battery staying in the high gear we were already in with 16 teeth? Some frantic calculator-bashing later and we decided to go for the low gear predicting a 20 mile distance by the end. Some greasy hands later and the spanners had been turned in anger to get the cogs swapped and the chain re-tensioned (the back ramp of the trailer making a rather natty temporary car lift). Race 2 would be the test of our mathematical and engineering skills as the driver order was reversed and Sam took the pilot’s controls for the start of race 2. Tracking the digital telemetry on our phones, the pace looked consistent, and we saw a higher average speed than expected in the first few laps… but would this continue the full race distance? Tensions were high.

A finish of 34th place with a solid 24.1 miles under our belt was a great effort given the conditions of the day, and we have more data to inform our gearing options for future races. We currently stand 65th in the world with our previous Goodwood showing in the bank and this should be just enough to squeak into the finals once again.  Congratulations to everyone involved on an excellent first weekend of racing.

Many thanks also go to the Friends of Canford School who kindly donated funds to purchase our shiny new, custom built trailer.  It was used for the first time at this event and the whole pit could see we were there to represent the school proudly as a result.

Photoset of images from the weekend (Canford parents - password required)