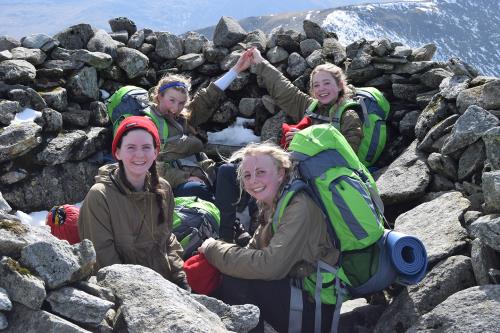 Thirty Fourth Form pupils headed for Snowdonia on 28th March for the annual CCF expedition. For the first two days they basked in uncharacteristically sunny conditions and warm temperatures before a more traditional Welsh mountain climate returned. Over 4 days they were challenged with some tough physical mountain hiking and camping, scaling between the five 1000M peaks including Carnedd Llewellyn, Glyder Fawr and Snowdon itself by the Watkiss Pass. Mountain instructors introduced them to a variety of grade 1, 2 and 3 scrambles and some abseiling, while they also had the opportunity to enjoy the indoor climbing walls at the Beacon Centre. As a less strenuous, but often psychologically demanding, alternative they each experienced a day in the underground caverns of 'Zipworld' and on the tree top course in Betwys-y-Coed. The pupils were commended by staff and instructors alike for their determination to test themselves and for their positive attitude in the face of significant challenges.