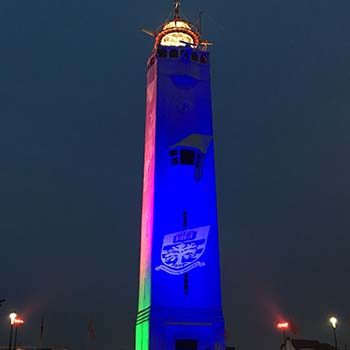 U14 Shell Hockey girls enjoyed a fantastic and memorable tour to Holland over the Easter holidays.

On day 1, a morning training session at our host club at Ring Pass was followed by our first round of matches and a chance to have a look around the beautiful town of Delft.  The welcome we received from Ring Pass was exceptional. National Anthems sung with gusto rather than melody before two terrific games. The Bs had a magnificent game in a well matched encounter, Millie Keen scoring an early goal to give us the perfect start, with Ring Pass equalising early on from a penalty corner. From then on it was end to end stuff, but the final score of 1. It was a terrific start to the week for the B team, and one of the best results we have achieved at Ring Pass for the B team for some time!

The A’s game was less well paired, but that perhaps underplays the quality of the play of the Canford As. This was a display of dominant passing hockey the equal of anything we saw in the Christmas Term, and a wonderful display of skills. Some of the inter-passing was exceptional, weighted passes anticipating movement off the ball, and releasing players into dangerous attacking positions. For the record we won 7.0, with Flora recording a hat-trick, and all of the girls playing with a confidence that was so good to see.

On day 2 we played two terrifically competitive games at a new club, Zoetermeer.  The Bs had another titanic struggle, slow to get into the game in the first half, but responding strongly to Mr Bizley and Miss Levy’s encouragements at half time and taking the game to the Dutch, scoring a well deserved equaliser in the final minute!   In the A match the girls competed superbly creating a good number of chances on the break but also defending well against an opposition playing at a very high level.  The final score of 1-0 to Canford was hard won, but we held on and could have seen 2-0 at the final whistle but for a shot pinging off the outside of the top of the post.

On the final day Holland 2018 came to a wonderful crescendo with our traditional finale at Roomburg HC. Roomburg have been our host club for the last eleven years of these tours, and they give us a memorable final night every time we play there.  The B team conceded an early goal from a penalty corner but then forced their way back into the game. Despite a valiant effort in the last 20 minutes the equaliser wouldn’t come, and the side had to accept their first defeat of the tour. The A’s played powerfully once again, had lots of possession but found themselves up against an excellent and agile keeper. It was going to take something special to beat her, so all the more credit to Bella who managed that feat four times! A temporary setback of an equaliser on the stroke of half time didn’t hold the girls back and they pulled away to an impressive 4.1 win.  We won the Canford/Roomburg cup with an aggregate of 4.2 and the monstrous trophy will accompany us home until June when Roomburg come to Canford.

While developing the foundation of girls’ hockey at Canford for another generation, there is so much more to these trips.   As teachers we delight in seeing the girls enjoying one another’s company, sharing the social events of the week, as well as taking on our Dutch counterparts on a sporting level.  We will remember with a smile the beach games, the Canford crest on the lighthouse at Noordvijk, the beautiful bulbfields, and the raft of moments of great humour.

We are fortunate to have some wonderful friends in Holland. Our welcome at Monday’s club (Ring Pass) and Wednesday’s (Roomburg) is assured, but the girls went out of their way to embrace the chance to meet and befriend their Dutch peers.  How good it will be to welcome both these clubs to Canford for their brief return visits in June (Roomburg) and September (Ring Pass). We also visited a new club, Zoetermeer, who made us very welcome in their hugely impressive club premises.

I am hugely grateful to my colleagues Mr Collison, Mr Ladd Gibbon, Mr Bizley, Miss Levy and Miss Johnson for giving up their holiday time to accompany the tour. And to our tour prefects, Alex Daplyn and Lucy Prest who have helped bridge the years from staff to pupil.

At the end of every Holland Tour the girls are always curious to know how their’s ranks in the pantheon of Canford U14 tours. ‘Holland 2018’ is certainly right up there with the very best!  The memories for the girls will last many, many years, of that I am sure.

For more photographs from the trip, please click on the link below: